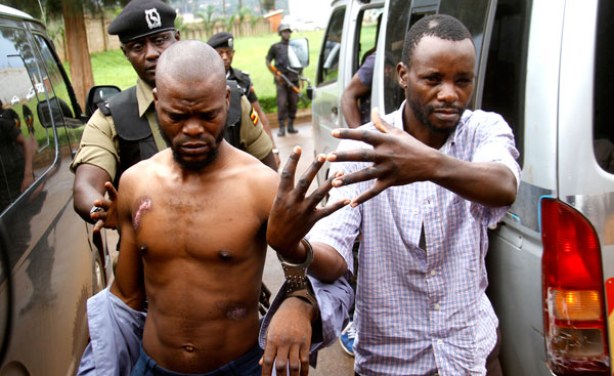 As law abiding citizens and peace loving Ugandans, it is our wish to see suspects on
charges of the attempted murder of General Katumba Wamala and the double
murder of Brenda Nantongo and Haruna Kayondo arraigned before court and justice
served. We however insist that due process and the constitutional presumption of innocence
must be adhered to at all times.

These were the words of DP National Legal Advisor, Omuk. Erias Luyimbazi Nalukoola when he addressed last week party press conference. Article 24 of the Constitution expressly prohibits torture. The provision of that Article states
that: “No person shall be subjected to torture or cruel, inhuman or degrading treatment or punishment”.
We’re concerned about illegally detained, brutalized and tortured suspects being brought before the courts of law,
we wish to add our voice in condemning the abuse of judicial processes that emanate from the abuse of
suspects’ constitutional rights. We have also heard the voice of the Uganda Law Society denouncing the abuse of
the human rights of those facing criminal prosecution and we join in denouncing and condemning in the strongest terms the torture of suspects. In addition we demand that such prosecution be dropped. There are
sufficient authorities to guide the courts as they exercise their discretion to halt the prosecutions that have been
tainted with evident case of torture, inhuman and other forms of degrading treatment.

In the case of Uganda vs Robert Ssekabira and 10 others, Justice Ralph Ochan made a landmark ruling when he
said: “We cannot stand by and watch prosecutions mounted and conducted in the midst of such flagrant, egregious and mala fide violations of the Constitution and must act to protect the constitutional rights of the petitioners in particular and the citizens of Uganda in general as well as the rule of law in Uganda by ordering all the tainted proceedings against the petitioners to stop forthwith and directing the respective courts to discharge the petitioners.”
In Dr Kizza Besigye vs Attorney General, the Constitutional Court stated the law in these words: “This court cannot sanction any continued prosecution of the petitioners where during the proceedings the human rights of the petitioners have been violated to the extent described above.

No matter how strong the evidence against them may be, no fair trial can be achieved and subsequent trial would be a waste of time and an abuse of court process.” These binding authorities point to only one thing: the dismissal of the charges and discharge of the accused persons. As Edmund Burke wrote “Law and arbitrary power are in eternal
enmity.”