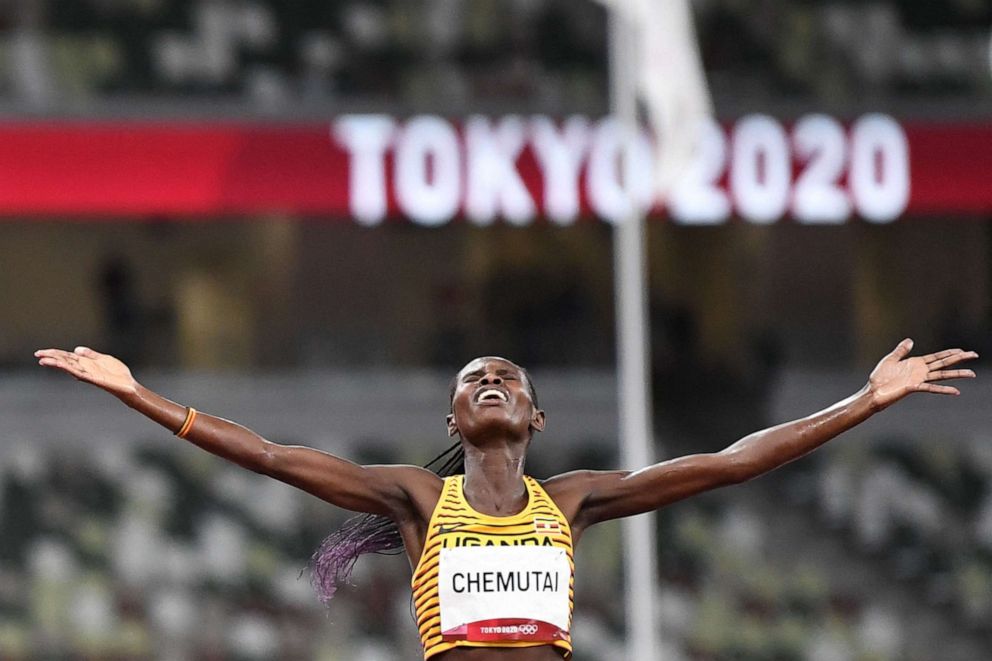 The Democratic Party has hailed the only gold won so far by a Ugandan at the Tokyo Olympics in Japan.

Congratulations to you Peruth Chemutai! We celebrate you because you are one of those Ugandans who have persevered to lift the country high in the sporting arena at international level.

The sporting sector World over has transcended into a huge commercial venture that has contributed substantially to the economies of countries however in Uganda the sports industry has not been given the due attention it does deserve, in Uganda sports have been used as an instrument of grandstanding and self-glorification.

The sporting activities are underfunded but also this little funding is greatly hinged on the President’s kindness and the patronization thereof is intended to beholden the sports fraternity to him.

Unfortunately, the government has ignored the sporting sector to the extent that sports facilities have either been sold to developers by government functionaries or has been given outrightly to other developers instead of sports, for instance the original sports field at Lugogo which was given to private developers to construct a shopping mall.

The Democratic Party also notes with great concern that, Sebei region in Uganda has produced World-class champions over the years namely, Kiprotich, Cheptegei, Kipsilo, Kiplimo, and yet the region has not been aided to thrive in athletics, the NRM government promised to construct a high-performance center in Sebei to tap the budding talent, many years down the road the government has failed to complete the building meaning that sporting is not actually the priority of the NRM government.

There are very many football players working out of Uganda and handsomely earning a lot of money which they send back home for development projects, football is a lucrative sporting activity for instance Christiano Ronaldo earns $663,000 weekly, Messi earns $646,000 weekly this translates into an average of 2.4 billion shillings per person per week, why can’t a country invest in such a lucrative sector! They cannot because the NRM’s priority is not in developing talents.

Today the fund associated with sports is shared between sports department and national council of sports which reduces on the impact that that money could do on the ground, first forward the government should merge departments of Physical Education and Sports with the National Council of sports to form a new National Sports Authority with better funding and structures nationally, this shall keep a consolidated fee which could cause great impact when channeled to a single activity.

Secondly, tax incentives equivalent to the respective sponsorship should be introduced for private sector companies that sponsor sports this will without a doubt attract more investors to the sector

The government can also restructure the education system to produce sportsmen and women and learners with double qualifications in academics and sports at primary seven, senior four, senior six and University this will, without doubt, check the levels of unemployment.

Lastly, on this issue, the government can create income-generating projects for all ex-internationals to enable them live a befitting life, they can, for instance, be made regional coaches attached to clusters of schools to impart knowledge to students in the sporting sector.

We should value sportsmen and women in the country as such any person or group of persons that belittle the players is the enemy of the sporting sector in Uganda and should be condemned by right-thinking members of society.

Upon that, we join all Ugandans in congratulating Peruth Chemutai on winning for the country a gold medal in the Women’s 3000m

We congratulate you once more!