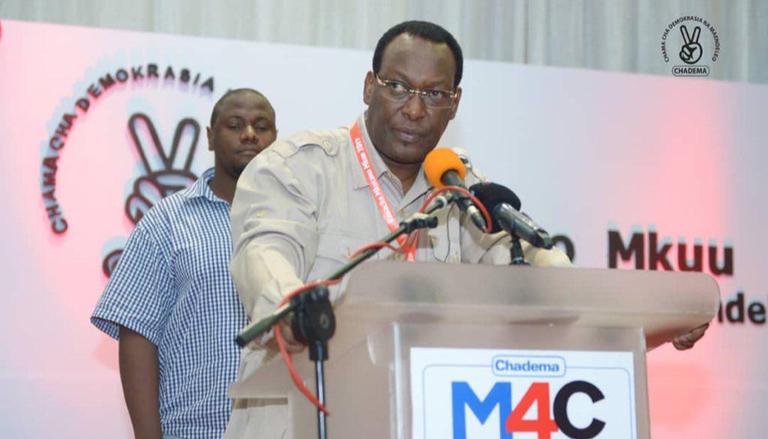 Tanzania’s main opposition party on Saturday called for protests over the arrest of its leader and said it had mounted a legal challenge to charges of terrorism filed against him.

Chadema chairman Freeman Mbowe was arrested 10 days ago along with other senior party members just hours before they were to hold a public forum calling for constitutional reforms.

The nighttime police raid and subsequent charges against Mbowe have dimmed hopes that new President Samia Suluhu Hassan would abandon the oppressive policies of her late precedessor John Magufuli.

At a press briefing on Saturday, Chadema secretary general John Mnyika said the party had filed a legal challenge to the case against Mbowe, claiming he was charged in absence of his lawyers in violation of his rights.

“Mbowe’s arrest was not only attacking him but also an attack against rights, freedoms and democracy in Tanzania,” said Mnyika, who was dress in a red T-Shirt emblazoned with the words “Katiba Mpya”, Swahili for “New Constitution”.

Mnyika urged party members and supporters to stage peaceful protests against the “fabricated” charges when Mbowe’s case is due back in court on August 5.

Critics have said the action against him was a throwback to the heavy-handed rule of the “Bulldozer” Magufuli who banned political rallies and cracked down on the media and civil society.

“What is happening now is not what (president) Samia has been portraying through her speeches and promises,” Mnyika said.

“Magufuli oppressed the opposition and press freedom but had not reached this level of fabricating terrorism charges against the opposition.”

Mbowe, 59, was charged on Monday with terrorism financing and conspiracy — offences that do not allow for bail under Tanzanian law.

Mbowe was transferred to a prison in Tanzania’s financial capital Dar es Salaam where police said he was being held “for plotting terrorism acts including to kill government leaders”.

State prosecutors have said the charges do not relate to Chadema’s planned meeting in the Lake Victory port city of Mwanza on constitutional reform but alleged offences that occurred last year in a different part of Tanzania.

His family have voiced concerns abut the 59-year-old’s health in detention, with his daughter saying he was being made to sleep on the floor and was suffering back pain.

The United States has expressed concern over Mbowe’s arrest and urged Hassan, Magufuli’s former vice president who took office in March, to ensure freedoms for all Tanzanians.

“One of the fundamental principles of democracy is that a person accused of a crime has the right to due process and equal & transparent treatment under the law. It is important that these principles be upheld,” the US ambassador to Tanzania Donald Wright posted on Twitter this week.

Mbowe was also among at least 150 opposition figures, according to the United Nations, who were arrested after denouncing what they saw as opposition fraud in an October 2020 election that returned Magufuli and Hassan to power.